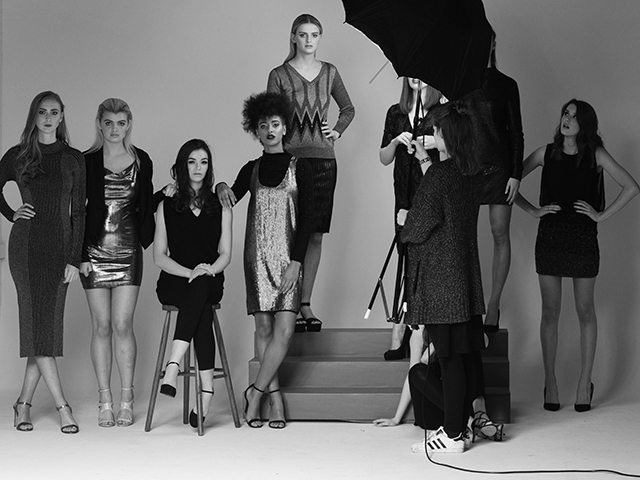 At North East Times we aim to tailor each issue’s lifestyle content in our ‘Out of Hours’ section of the magazine to reflect a current trend or time of year. In producing the December edition of the magazine and with the Christmas and party season just around the corner the obvious choice was to feature trends and styles for the festive occasions our readers would be attending and looking forward to in December.

Being the final issue of 2016 I decided we ought to end the year with a flourish and put on a bit of a production number for our fashion shoot. I first got in touch with Kelly about the shoot in late October to see if getting 10 girls from Tyne Tees for the shoot was even feasible, as always the answer was ‘no problem!’

Kelly provided the cards of the available models and suggested a mixture of girls I’d worked with before and some of the agency new faces. Once a date was secured we were in a position to take the production of the shoot forward and Kelly was very supportive, particularly in the instance of providing and suggesting alternative models when one or two became unavailable on the date due to unforeseen commitments.

It was essential on the day that each model was prompt to the call time of 9am at HD studio in Newcastle as the undertaking of getting each model camera ready in our time frame meant the team had to work quickly and efficiently to prepare 11 models (10 from TTM and 1 from another agency.)

A team of 3 make up artists was expertly led by Josephine Birkett and creative hair styling was provided by Rebecca Dixon and her assistant. The clothing was loaned by House of Fraser Metrocentre, showcasing their latest winter occasion wear stock.

The importance of models arriving appropriately prepared can not be understated on a shoot like this, there was no time to remove makeup or wash hair so I was delighted to see each girl show up with clean hair and faces ready for grooming, it sounds a simple request but often it is not the case, however I’m always confident in the professionalism TTM instil in the models they represent. It’s a small consideration that makes a world of difference when under time pressures on location.

My vision for the shoot was a large group portrait to be photographed in sections in order to light each model individually, this required a huge amount of concentration and discipline from each girl to remain still and consistent in the composition in order to make it possible to composite the final image in post production. Whilst directing the group I wanted each girl to show their individuality and express themselves so that they each outfit was of equal interest in a group of 11. I had known what to expect from the girls I’d shot before and wasn’t disappointed but I was particularly impressed with Ella Crocket who I was shooting for the first time, she was exemplary in her subtle movements, posture and professionalism in the way she conducted herself throughout.

After post production was completed we were really happy with the final images. The shoot, thanks to everyone’s hard work and contribution to the collaboration was a success this was underpinned by the excellent coordination and assistance from Kelly and the TTM team without which the shoot would not have been possible.

The feature is released the December issue of North East Times and will be available on www.netimesmagazine.co.uk.